The aim of this study was to determine whether statin use exerts a protective effect against pancreatic cancer in type 2 diabetic patients. A retrospective population-based cohort study was designed to analyze the National Health Insurance Research database (NHIRD) from 1997-2010 in Taiwan.

A total of 1,140,617 patients with a first-time diagnosis of type 2 diabetes were enrolled. The event was defined as newly diagnosed pancreatic cancer. A Cox proportional hazards regression model with time-dependent covariates was used to calculate hazard ratios (HRs) and 95% confidence intervals (CIs) for risk of pancreatic cancer associated with statin use in the diabetic cohort.

More research is needed to clarify this association.

Widely used medications for other disease processes, such as beta-blockers used for the management of hypertension, may provide therapeutic potential in patients with cancer, perhaps by altering the tumor microenvironment.

The article by Watkins et al in the current issue performed a comprehensive review of beta-blocker use in women with ovarian cancer, and identified nonselective beta-blockers associated with longer overall survival.

via Are beta-blockers on the therapeutic horizon for ovarian cancer treatment? – Bunch – 2015 – Cancer – Wiley Online Library.

BACKGROUND
Ethnic minorities, especially African Americans and Latinos, bear a disproportionate burden of colorectal cancer (CRC), as reflected in incidence, cancer stage, and mortality statistics. In all ethnic groups, first-degree relatives (FDRs) of CRC cases are at an elevated disease risk. However, underuse of CRC screening persists and is particularly evident among minority groups. The current study tested a stepped intervention to increase CRC screening among an ethnically diverse sample of FDRs of CRC cases.

METHODS
A statewide cancer registry was used to recruit CRC cases and through them their FDRs. Relatives who were not current on CRC screening were randomized to intervention or usual-care control arms. The stepped intervention consisted of ethnically targeted and individually tailored print materials followed by telephone counseling for those unscreened at 6 months.

CONCLUSIONS
Overall, the intervention was effective in increasing screening rates. Oversampling racial/ethnic minorities allowed for the examination of effects within subgroups, revealing no effect among African American individuals. This finding illustrates the importance of including sufficient numbers of participants from diverse ethnic subgroups in intervention research to enable such stratified analyses.

In this article, we describe attributes of CCDR, present examples of studies that illustrate those attributes, and discuss the potential impact of CCDR in addressing disparities in care. We conclude by emphasizing the need for collaborative research that links academic and community-based settings and serves simultaneously to accelerate the translation of CCDR results into practice.

The National Cancer Institute recently launched its Community Oncology Research Program, which includes a focus on this area of research.

via Cancer Care Delivery Research: Building the Evidence Base to Support Practice Change in Community Oncology. 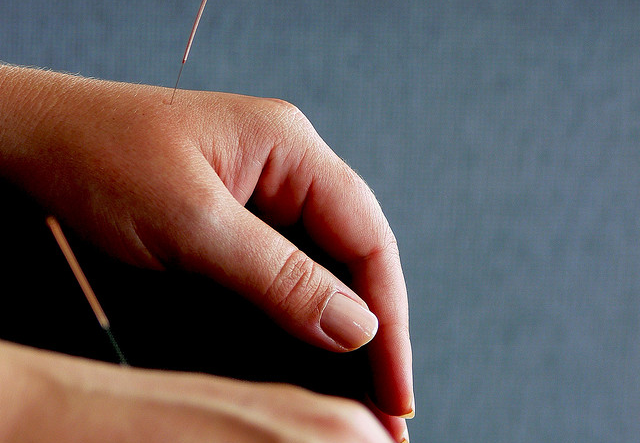 Hot flashes (HFs) are a common side effect of cancer treatment. The purpose of this systematic review was to evaluate evidence related to the use of acupuncture for HFs in cancer patients.

EMBASE, MEDLINE, Cochrane (all databases), PubMed, the Cumulative Index to Nursing and Allied Health Literature, and Scopus were searched from their inception through December 2014. Included studies had to be randomized controlled trials with a usual-care and/or placebo comparison group that investigated acupuncture to treat HFs in cancer patients. No language limits were applied.

The risk of bias (ROB) was rated as low, high, or unclear according to Cochrane criteria. Both within-group and between-group changes were evaluated. Four hundred two items were identified, and 192 duplicates were omitted; this left 210 publications to be screened. Eight studies met the inclusion criteria, and all involved women with breast cancer. All studies showed significant within-group improvement from the baseline for true acupuncture (TA). One study showed significant improvement in favor of TA over sham acupuncture (SA; P < .001), 1 study found in favor of TA over SA for nighttime HFs only (P = .03), and 1 study found in favor of TA over SA or untreated controls (P < .01 and P < .001, respectively). Between-group (TA vs SA) effect size (ES) estimates for daytime and nighttime HFs were calculated (ES range, 0.04-0.9) whenever possible. No studies were rated with a low ROB.

In conclusion, the current level of evidence is insufficient to either support or refute the benefits of acupuncture for the management of HFs in cancer patients. Future studies should provide within-group and between-group ES estimates in addition to P values.

Even light and moderate drinking (up to one drink a day for women and up to two drinks a day for men) is associated with an increased risk of certain alcohol related cancers in women and male smokers, suggests a large study published by The BMJ today.

The study, which involved almost 136,000 people, found women who drank the equivalent of a glass of wine a day over a 30-year period were 13% more likely to develop one of the alcohol-related cancers (breast cancer being the most common) than women who didn’t drink at all.

The study found low to moderate drinking increased the risk of certain types of cancers already thought to be linked to alcohol, but only among women or people who smoked. Men who didn’t smoke and drank moderately had no increased risk of any type of cancer.

New software could speed up breast cancer diagnosis with 90% accuracy without the need for a specialist, according to research published in the open access journal Breast Cancer Research.

Introduction: Pathologists currently diagnose breast lesions through histologic assessment, which requires fixation and
tissue preparation. The diagnostic criteria used to classify breast lesions are qualitative and subjective, and inter-observer
discordance has been shown to be a significant challenge in the diagnosis of selected breast lesions, particularly for
borderline proliferative lesions. Thus, there is an opportunity to develop tools to rapidly visualize and quantitatively
interpret breast tissue morphology for a variety of clinical applications.

Methods: Toward this end, we acquired images of freshly excised breast tissue specimens from a total of 34 patients
using confocal fluorescence microscopy and proflavine as a topical stain. We developed computerized algorithms to
segment and quantify nuclear and ductal parameters that characterize breast architectural features. A total of 33
parameters were evaluated and used as input to develop a decision tree model to classify benign and malignant breast
tissue. Benign features were classified in tissue specimens acquired from 30 patients and malignant features were
classified in specimens from 22 patients.

Results: The decision tree model that achieved the highest accuracy for distinguishing between benign and malignant
breast features used the following parameters: standard deviation of inter-nuclear distance and number of duct
lumens. The model achieved 81 % sensitivity and 93 % specificity, corresponding to an area under the curve of 0.93
and an overall accuracy of 90 %. The model classified IDC and DCIS with 92 % and 96 % accuracy, respectively. The
cross-validated model achieved 75 % sensitivity and 93 % specificity and an overall accuracy of 88 %.

Conclusions: These results suggest that proflavine staining and confocal fluorescence microscopy combined with
image analysis strategies to segment morphological features could potentially be used to quantitatively diagnose
freshly obtained breast tissue at the point of care without the need for tissue preparation.